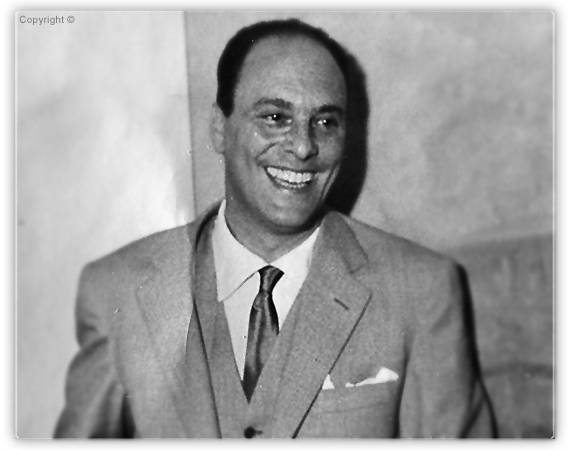 The man and the artist

Piero Sadun was born in Siena on November 11th, 1919. Even since childhood, his lively and imaginative sensitivity manifests and expresses itself by drawing. Still a teenager, he joins the world of Senese artists, attending the evening classes at the Istituto dArte of Siena and the workshop of painter Umberto Giunti.

The following exhibitions will be organized for the centenary of the birth of Piero Sadun:
4 - 27 June 2019 L'Aquila - Palazzo dell'Emiciclo with inauguration on 3 June at 18;
11 July - 8 September 2019 Siena Public Palace - Warehouses of the Sale with inauguration on 10 July at 6.00 pm. 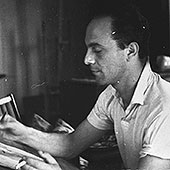 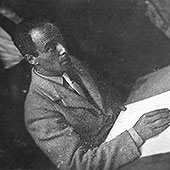 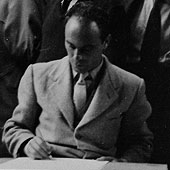 with the racial laws, the Fascist regime prevents him from completing his studies: as a Jew, he can no longer attend the Classical High School  Enea Silvio Piccolomini and must prepare privately for his high school final test. Once obtained such degree, he leaves for Florence to join as an external student the painting lessons in the workshop of Primo Conti; after a few months, however, Conti – an official painter of the regime – informs Sadun that it is too dangerous for him to have a Jewish student.
Painter Memo Vagaggini welcomes then Sadun in his Florentine workshop: at this stage, though, Sadun is impatient to any teaching – he only wants to paint.
Back in Siena, he opens a studio in via Diacceto, soon to become the meeting point for his friends, many of whom would later be found among the most prominent names in Italian culture.
Between 1940 and ’41, Professor Mario Bracci asks him to paint a series of frescoes in the former Certosa di Pontignano. During these years, he becomes close friends with Cesare Brandi, with whom Sadun will have a longtime friendship.
The frescoes of Pontignano, as well as the one in the family home in via Cavour, depict the Sienese countryside in autumn.
In 1940, Sadun draws the illustrations for Mario Verdone’s short poem La città dell’uomo: a tragic and bitter vision of Siena, whose war blackout is a powerful metaphor of the regime. While the long shapes are reminiscent of Modigliani, the streets of Siena as drawn by Sadun evoke Ottone Rosai, with puppet-like human figures that take on their shoulders the burden of some pain and sorrow, just like the town’s roofs and alleys, to express the drama of life.

All these early works – from 1940 to the end of World War II – will be signed by Sadun under the pseudonym “T. Duna” because of the racial laws.

after fleeing the deportation of the Siena Jewish community, with the help of Don Luigi Rosadini Sadun joins the partisan XXIII Brigata “Arezzo”, under the command of Siro Rosseti.
On July 3rd, 144, the Allied forces free Siena. Piero Sadun can go back to his family; later in the same year, in October, he teams with his lifetime friends Verdone, Gabriella Drudi and sculto Raffaello Salimbeni to open a thrift shop on the main street of Siena.
Early in 1945, Sadun leaves Siena and moves to Rome, where he finds his old friend Cesare Brandi and consolidates his friendshiip with Giovanni Stradone and Toti Scialoja, with whom he sets up the first exhibition of his works.
In 1947 he opens a new exhibition with Stradone and Scialoja, along with Arnoldo Ciarrocchi; in the same year, Sadun’s works are on exhibition at the Galleria del Fiore in Florence, again with Stradone’, Scialoja’ and sculptor Giovanni Salimbeni’s.
In 1948, Sadun is awarded the First Prize at the Concorso Nazionale di Pittura held by the Italian Ministry of Education, that leads him to teach for two years at the Liceo Artistico di Roma.
After being awarded by the French government a two-month scholarship in Paris, in 1950 he comes back to Italy and exhibits his works at the  X Biennale di Arti Figurative di Venezia.
Also in 1950, he is set and costume designer for the ballet The Prodigal Son, by coreographer Aurel Millos, with music by Prokofiev, for the Teatro dell’Opera di Roma. Again in 1950, he wins the First Prize for Advertising (Tourism), followed by the Premio Borletti in Milan in 1951.
In the following two years he is professor of History of Costume at the Centro Sperimentale di Cinematografia di Roma, where he also frescoes the wall behind the altar in the CSC’s chapel.
After the exhibition at the Galleria il Pincio of Roma (1953), he becomes teacher of Beaux Arts at the Istituto d’Arte di Urbino; in February 1955 he opens a new exhibition at the Galleria la Medusa of Rome with 16 works inspired by the world of the circus. In 1956, he wins at the IV Mostra Nazionale di Arti Figurative of Spoleto.
In January 1956 his work is part of the exhibition of the contemporary Tuscan artists at the  Palazzo delle Esposizioni di Roma.

his works are on exhibition in New York, followed by the “Young Italian Painters” exhibition in Milan in ’58; in 1959 he wins the Premio Agip, but in the same year he also exhibits in Milan, Verona, Turin, Bologna, Rome. Italy’s State Television, RAI, commissions him the drawings for a publication on the third radio channel.
He also begins his work as interior designer for private homes, which he will continue until his death.
In 1960 he is back at the Biennale di Venezia; he also wins the Premio Nazionale Città di Palermo; in 1961 he is again in Verona, with other solo exhibitions in Rome, Florence and Palermo. In 1963 he wins the Premio del Presidente della Repubblica at the Premio Marche, while his works are on exhibit at the Galleria la Salita di Roma. In Florence, at the Maggio Musicale, he is set and costume designer for Arnold Schönberg’s first theatre work, Erwartung, later reprised by the Opera di Roma in 1964.
In 1966, together with Ettore Colla, Giuseppe Capogrossi, Lucio Fontana, Leoncillo Leonardi, Seymour Lipton and Victor Pasmore, Sadun is the co-founder of an artistic group that, at Galleria Editalia in Rome, gives birth to Qui arte contemporanea magazine.
In 1965 his works are on exhibition at Italian Art Today in Denmark; many exhibition follow up to 1969, when Sadun is appointed Director of the Accademia di Belle Arti in l’Aquila. Among his other project, he is set and costume designer for directors such as Egisto Macchi and Walter Zappolini, for the Teatro Eliseo of Rome, as well as for Aurel Millos and his Pazzia senile, at the Teatro dell’Opera di Roma.
As for his work as Director of the Accademia di Belle Arti in l’Aquila, Cesare Brandi wrotes. “Sadun had turned the Accademia of l’Aquila into a sort of Parnassus; he had wanted the most appealing names in literature, such as Alberto Arbasino, or music, such as Sylvano Bussotti. He dared to mix the most dangerous elements, almost like sulfur, charcoal and saltpeter. The results were a thundering mix, that he always managed to dominate and sedate”.
In June 1972, he exhibits his works at the Galleria Editalia – Qui arte contemporanea of Rome.
In April, 1973, and then again in August of the same year, he undergoes two massive operations that impair his speech. It is the beginning of a desperate struggle against cancer: yet, he continues to paint. His works are on display at the X Quadriennale d’Arte in Rome and, in January 1974, at the Galleria Bergamini in Milan.
Piero Sadun dies in Siena on November 22nd, 1974. He has just turned 55.